Is That Really a Police Car?? 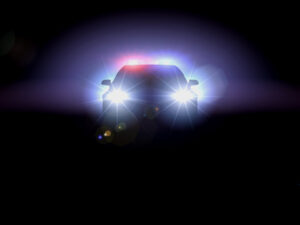 No matter where you are, the sight of flashing red and blue lights in your rearview mirror will make your heart race a bit faster. But what if you see those lights and the car is not marked in any way, or does not look like a typical police car?

Many people, especially women, are taught not to stop if an unmarked car is trying to pull them over – at least not until you can do so in a well-populated or busy area. This suggestion is further advanced by a “story” currently making the rounds on Facebook and other social media sites about a woman being flagged over by a purportedly “unmarked” police car with flashing lights, who smartly dials “112” on her cell phone, putting her in touch with a police dispatcher who tells her that they have no cars in her area. She keeps driving and is finally saved when the real police show up and surround a would-be assailant pretending to be a police officer. While that particular story, and its common variations, may be just urban legend (especially the suggestion that dialing “112” will actually put you in touch with a dispatcher, which is not accurate), there are certainly stories of individuals who have attempted to impersonate police vehicles with light bars or other devices, and attacking people (especially women) who dutifully and automatically pull over at the sight of those lights. So the question remains, what should you do if that situation should arise? And what are the implications if you do NOT pull over and the vehicle is an actual police officer with a legitimate reason to stop you?

One consideration is that “failure to yield” to a police officer, or failure to obey the lawful direction of a police officer is generally a crime (or at the very least, a traffic offense) in most states, and can lead to fines and points or other impact upon one’s driver’s license. Would an actual police officer be understanding of an explanation about your fear of his unmarked vehicle? Will he give you a ticket even though you explain that you were taught by your parents not to pull over for an unmarked “police car”? When personal safety is at issue, and you can’t be completely sure of the motives or legitimacy of a car flashing what appear to be emergency vehicle lights at you, start by turning on your own emergency flashers, so that the “officer” knows you are aware of his presence and aren’t avoiding him. Try to pull over in a well-populated area if possible, or at least in a well-lighted area or a business parking lot. If you aren’t near a well-populated and well-lit spot, or otherwise still question the legitimacy of the vehicle, dial 911 on your cell phone and advise the dispatcher of your location, and that you are being pulled over by a car you cannot identify as an actual police car. At the very least, if it turns out to be an actual police officer decides to give you a ticket for “failure to yield” to him, you will have a timed and documented (911 recording) explanation of your rationale for not immediately doing so, which you or your attorney will likely be able to use to get such a charge thrown out.

Remember, while the odds are that those flashing lights in your rearview mirror is an actual police officer, if the vehicle does not look like a police car, don’t hesitate to think about your safety first.

The choice of a lawyer is an important decision and should not be based solely on advertisements.  The information obtained at this site is not, nor is it intended to be legal advice, and does not create an attorney/client relationship.  Please do not send us any materials you consider confidential unless you have received a signed engagement letter from this office indicating we represent you.